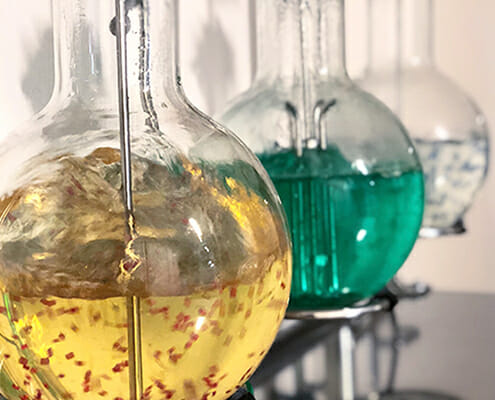 It is probably the oldest procedural field: mixing of fluids and the appurtenant term of stirring. The experience that has been gathered throughout the years, the implemented research, and the broad know-how in the field have been growing for decades. Therefore it is hardly astonishing how much the knowledge and the literature about this technical process have grown. Every one of us thinks of a stirring process as a rotatory movement that agitates a liquid in motion – after all, that is how we all do it in the mornings with our cup of coffee. Many of us, regardless whether we are a mechanical engineer or a process technician, will at some point in their lives rack their brains about the mixing process. However, very few think about abandoning the rotary movement. So when performing a mixing process without the so familiar rotary movement, how is it called: mixing or stirring? 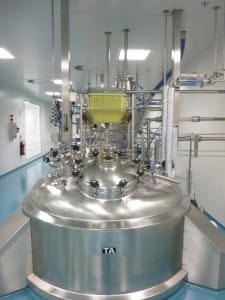 The solution is called the vibratory mixing technology and has been represented in various fields of application as a vibromixer for several years. As the name already implies, the mixing process is not executed by means of a rotary mixing element but by means of vibration. However, the vessel is not rocked in this case. Also this technology uses a mixing element, which is designed significantly differently and uses high-frequency up-and-down movements.

This device that was developed and enhanced already 30 years ago by D.Eng. Hans Müller is marketed by the company named FUNDAMIX® . What distinguishes this vibratory mixing technology, what are its advantages and fields of application? Before we can take a look at the decision making features, it makes sense to explain the operating principle of the device first: The drive motor, that was designed and manufactured by the manufacturer of the device, uses a sinusoidal alternating current power supply (Europe 50 Hz, America 60 Hz…) to create an oscillatory motion in the form of an amplitude. A coil with an electromagnetic core creates a magnet field (the static part). The rising voltage in the positive sinusoidal part causes the dynamic component to be pulled in by means of magnetic force. During this process, the integrated spring system stores energy and triggers the resetting motion of the system in the falling portion of the sine wave. In the identical process of the negative sinusoidal part of the wave, the motion is repeated identically, however in the opposite direction. That way, the device transforms the directly supplied mains frequency into a double stroke of the mixing element – 100 Hz in Europe and 120 Hz in America. As opposed to an AC motor the mixing intensity in this system is adapted through the changes in the voltage and not the frequency.

The mixing element is attached to the already mentioned dynamic part of the motor, which follows the Bernoulli’s Principle by means of its geometrical features. Therefore the amplitude generated by the drive is transferred to the mixing element comprised of a shaft with an attached mixing disc. The up-and-down stroke (oscillation) of the disc pushes the liquid through conical holes similar to a nozzle. The generated vertical flow thus causes the mixing of the content of the entire vessel. The tapered from of the conical holes allows for an upward (type A) or downward (type B) flow. For this purpose, the entire mixing disc is turned upside down. The layout of the discs (there is a possibility of several discs generating various flow directions) and thus the orientation of the cones is determined by the process to be used. Discs directing the flow downwards (type B) are used for processes with sedimenting solids or strongly frothing media, whereas the type A discs are suitable for emptying vessels. The latter can be placed so closely to the bottom of the vessel that even in a larger process vessel, also the smallest of amounts of the medium in the vessel will be mixed. This is also the reason why the technology has found its place, e.g. in the filling of insulin vials since the pharmaceutical company has to make sure that the expensive insulin is moving until the very end of the process. Any volume that is not mixed has to be disposed of, which means a loss of money. The optimal mixing throughout all levels of the vessel without any baffles (since there is no rotation, there are no whirls) not only has a positive impact on the mixing process, but also saves investment costs in the construction of the vessel or the design of the cleaning system. The mixing elements are made of AISI316L stainless steel in accordance with the general strict requirements in the pharmaceutical industry. By request, more affordable versions are also available: The available materials reach from stainless steel to titanium, Hastelloy, and plastic.

An additional benefit is the simple sealing principle: Since there is no rotary motion, the sealing is considerably simplified and only encompasses a membrane. The membranes available in various materials as well as the FDA and USP Class VI certification, providing sealing during the stroke reaching from 0 to 3 mm from the vessel, allows for a simple sealing without any mechanical seals, e.g. expensive and complex face seals. During the movements of the mixers and the seal, there are no abrasive strokes therefore the mixing process is suitable for various sterile applications. Mechanical seals, including their wear and tear, frequently cause problems with product contamination. Membrane seals are as standard suitable for pressures of -1/5 bar, however can also be provided in higher classes by request. The temperature classes reach to approx. 150 °C, which are also covered by the standard CIP and SIP cleaning processes. This solution also massively reduces maintenance costs: A replacement membrane, which shall usually be replaced once annually, only costs a couple of euros.

When it comes to maintenance costs, the owner can benefit from additional features, such as the low-wear drive motor. It lacks any mechanical guide elements such as roller bearings or guides, which are subject to wear and tear. During the regular inspection of the drive motor, the user has to thus replace the springs, springs seats, and smaller wearing parts. At DrM however, vibration motors that have been in use daily for over twenty years, are simply re-installed into the device after an inspection. At the same time, low energy costs positively impact the operating costs of the system. Compared to a rotary mixer, a vibromixer only consumes a third of the energy. This can be traced back to the variant of the mixing technology: The features of flow mixing in this case will provide benefits in the form of product-friendly, low shearing energy mixing in the low viscosity area (up to approx. 500 mPas). Due to the high share of vertically oriented flows no slanting and fast rotating mixing blades that could e.g. damage cell cultures are necessary. The flow allows for a high product circulation resulting in a highly homogeneous product within the entire process vessel. This homogeneity can only be achieved by means of high rotation speeds in the traditional mixing systems (such as with magnetic mixers attached to the bottom).

All the production stages of the technology, from the laboratory stage all way to the full-scale production system, are also Atex certified. The current certification covers Zone 1 for gas from the Temperature class T4 on. Continuous development shall also make it possible to offer an Atex Zone 0 version in the future. Additionally, all systems are EMC tested, provide IP protection, and the company is ISO9001 certified.